Over Forty Years of Welded Vision 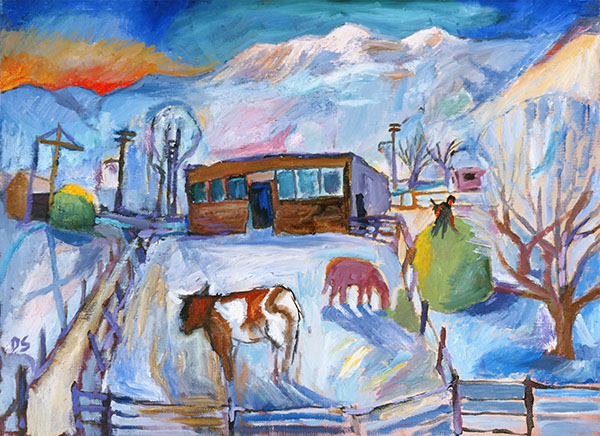 In 1968 when Veloy and I came back to Utah, I set up my first studio in my dad’s old chicken coop in Alpine, the small farming community where I had grown up about thirty miles south of Salt Lake City. We had two children by that time and not a penny to our name. I had determined to make my living as an artist but hadn’t the slightest idea how I was going to do it. I set up shop with a borrowed welding torch and not much else. I scrounged about for scrap metal and odd found objects that could be welded together and began assembling them into forms that would make some sense. Many were fairly abstract and others were inspired by the old rusting farm machinery I had grown up around. Over time, “Victorian-like” farm shapes tended to dominate both the forms and my mind. Many had wings and I came over time to call them “airships”. Looking back, I realize now that they were thinly-veiled metaphors of flight, freedom and transcendence…a safe escape from the finality of mortal life. They were my own personal totems for exploring the desire we all have to break the bonds of Earth. Like a child builds and plays, I was creating a world I could only imagine. Subconsciously, I was using these shapes and forms to find some sense of meaning in the hope we harbor for continuance beyond this life. The assemblages, usually manned by small figures modeled in wax and then cast in bronze, became a major aspect of my work. I have created dozens, no….hundreds of them over the years, in all shapes and sizes. Many found their way into private homes, hanging from thin cables and gently swaying back and forth in quiet exhilaration. Some with ten to twenty foot wingspans hang in airports and office buildings throughout the country. People are drawn to them without understanding the passion that inspires them. I think it has something to do with feelings we all harbored as young children….feelings inspired by our fondest visions of exploration, hope and personal expression.

In the past five years I have slowly been diverted from the machine and airship images. Each piece is very labor-intensive and unique, and they became more difficult to construct as I have gotten older. My interest has gradually swung toward other projects until I barely ever work with the welded assemblages anymore. But I miss them.

Lately, I have been working on the refurbishment of a couple of pieces which I created twenty years ago for Primary Children’s Medical Center in Salt Lake City. They were originally positioned in the center of the visitor’s waiting room of the intensive care unit. The space is being re-modeled and the hospital administration have asked if I would re-configure the two assemblages into a flatter format that can attached on two of the side walls. So I have been cutting, re-welding…..and genuinely reminiscing about the past and that very fulfilling aspect of my work.

One of the pieces consists of a scaffold-like platform on which several small children scramble about, exploring the structure and running it. The other piece is a one-man (rather, a “three-kid”) submarine. Built of odd shapes—lids, brackets, food mixer beaters and propellers—- it surges forward under the power of imagination. Metal flashings and splashes of bronze are transformed in the mind to organic shapes as lacy as a coral reef and as billowy as a passing cloud.